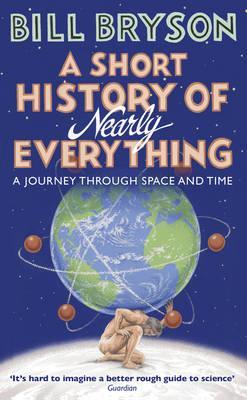 Bill Bryson describes himself as a reluctant traveller: but even when he stays safely in his own study at home, he can't contain his curiosity about the world around him. A Short History of Nearly Everything is his quest to find out everything that has happened from the Big Bang to the rise of civilization - how we got from there, being nothing at all, to here, being us.

Bill Bryson's challenge is to take subjects that normally bore the pants off most of us, like geology, chemistry and particle physics, and see if there isn't some way to render them comprehensible to people who have never thought they could be interested in science. It's not so much about what we know, as about how we know what we know. How do we know what is in the centre of the Earth, or what a black hole is, or where the continents were 600 million years ago? How did anyone ever figure these things out?

On his travels through time and space, he encounters a splendid collection of astonishingly eccentric, competitive, obsessive and foolish scientists, like the painfully shy Henry Cavendish who worked out many conundrums like how much the Earth weighed, but never bothered to tell anybody about many of his findings. In the company of such extraordinary people, Bill Bryson takes us with him on the ultimate eye-opening journey, and reveals the world in a way most of us have never seen it before.